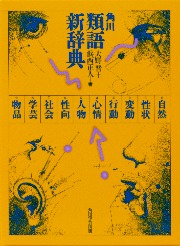 For almost half a century, since its first edition in 1981, the New Kadokawa Thesaurus has been cherished as an incomparable literary treasure.
The thesaurus is organized according to the major “lexical categories” of “nature,” “properties,” “variations,” “activities,” “affects,” “persons,” “inclinations,” “society,” “arts and sciences,” and “objects,” each of which are then organized into ten medium-sized categories, which are further subdivided into ten more detailed categories. Each entry contains an example sentence to clarify the meaning through actual use.
Not only does the thesaurus help you pinpoint words you want to replace, but it also helps you with “fuzzy” and “associative” searches when you find it difficult to express what you want to say or cannot think of words that properly express the feeling or content you want to convey. You will make new discoveries simply by browsing the pages, and this will give you a new sense of the depth of the Japanese language.
All words are accompanied by a “phase,” an abbreviation indicating the register of words (e.g. general, literary, slang, etc.). In addition, when the same word is listed in other lexical classifications, the classification number is displayed to make it possible to locate the word elsewhere. The diverse uses of words can therefore be grasped by referring to the same word in different locations.

In the JapanKnowledge edition, it is possible to search not only for target words but also words with similar semantic areas and related words by following the classification links in the “lexical classification system table.” The thesaurus thus facilitates an understanding of the differences in meaning and usages of similar words, and can be employed in a wide range of ways to help you acquire the ability to write abundantly and expressively.