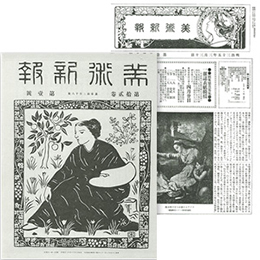 Meiji and Taisho Period magazine of serious art criticism, a first-class resource for the study of modern Japanese art history. Packed with illustrations, and searchable by proper noun.

The Bijutsu Shinpo, published for nineteen years between 1902 (Meiji 35) and 1920 (Taisho 9), is an indispensable periodical resource full of information for anyone interested in modern Japanese art and modern culture in general. The articles it contains focus not only on Japan at the time, but also painting, sculpture, crafts and calligraphy from the ancient to contemporary periods of the East and West, providing editorial commentary on artists and criticism of their work and trends in the spirit of journalistic neutrality. For us at present, this is the reason it is considered to be the most reliable and accessible documentary material available. In addition, the magazine took pains in creating visually vibrant page layouts by using the most advanced photographic print techniques. One can also find in its editions valuable prints of items that can no longer be seen, such as the wall paintings in the former Imperial Theatre in Tokyo.

In keeping with its designation of Shinpo (current news), the magazine’s strength was in its ability to provide the most recent information with its introductions of Western art and adaptations. Although it is widely thought that the magazine Shirakaba led in the introduction of impressionist art and artists, in reality Bijutsu Shinpo constantly preceded it as seen in their earlier coverage of artists, such as Millet, Rodin, Cézanne and Renoir.

As an example, a print of Rodin’s The Thinker appeared with an introduction in the Meiji 42 (1909) January edition (Vol. 7, No. 20), and then a year later Morita Kamenosuke published Furansu chokokuka Rodan (The French sculptor Rodin), a critical biography of Rodin along with eleven prints of his sculptures in Meiji 43 (1910) February (Vol. 9, No. 4). This is nine months earlier than the Shirakaba issue featuring Rodin in November 1910 (Meiji 43).

With the JapanKnowledge edition it is possible to peruse individual issues like a book by turning pages and also conduct keyword searches and get volume and page listings immediately. Article titles and authors can also be searched, while much of the vocabulary found in the article texts had been adopted as search terms.

Additionally, the immense volume of searchable data for the Bijutsu Shinpo web edition contains the news items and miscellaneous entries at the end of the issues, and proper noun references (about 68,000) considered important. Conventional cataloguing has only been able to list page numbers in the bibliographical contents of journal news and miscellaneous columns. Moreover collecting and recording proper nouns contained in the articles was thought to be beyond the capacity of an individual researcher. These proper nouns include categories such as personal names (of artist from ancient to contemporary periods, both from the West and East, their significant contemporaries, such as writers, scholars, outstanding figures), exhibition and event news, and venues and locations of art (including temples and shrines). By using this search method, one can gather information and facts pertaining to “when,” “where,” “who,” “what,” and “how,”—the bibliographical data needed for doing biographical research of artists and their work.

We hope you will make full use of the leading and innovative digitized data archive found in the Bijutsu Shinpo web edition.