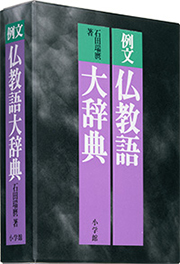 This unabridged dictionary of Buddhist terms, unrivaled with its wealth of example sentences, allows users to deeply understand the world of Buddhism, which has deep connections to Japanese culture, from its language. The Bukkyogo Daijiten contains over 30,000 Buddhist terms, drawn from Japanese Buddhism-related materials.
The dictionary comprehensively covers Buddhist concepts and idioms, from general expressions that live on in daily speech to esoteric notions and provides detailed explanations of key terms.
The Bukkyogo Daijiten also includes over 45,000 example sentences, drawn not only from Buddhist texts, but also from a variety of documents from ancient to modern times, including literature, records, essays, diaries, and picture scrolls. It is also useful for deepening your understanding of Buddhist literary and history writings.
The dictionary provides easy-to-understand commentaries from a comprehensive perspective without bias toward a particular sect.
Supplementary sidebars are also included to provide even more detailed explanations as needed.
In the “Major Sources” section, sources are listed in phonetic order. Each source is presented with its formal and abbreviated titles, the latter of which is cited in the entries, as well as the broad category to which it belongs (with the exception of Buddhist texts) and the era of its origin.
With the JapanKnowledge edition of the Bukkyogo Daijiten, users can perform heading searches of idiomatic phrases and maxims. In addition, the main body text contains hyperlinks to reference terms and antonyms. Furthermore, when the user mouseovers words in red in the main body, pop-ups of annotations such as “different expression in alternate texts,” “erratum in the original manuscript,” and “fill-in of omitted words” are displayed.
Author: Mizumaro Ishida