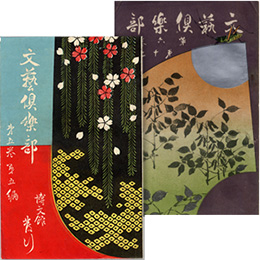 Bungei Kurabu (Literary Club) was published by Hakubunkan publishing house from January 1895 to January 1933. The total number of volumes included 457 issues and 150 regular and irregular extra issues. Of these the 284 issues made available here are those released during the period running from 1895 to 1912.

In 1895 the publisher decided to merge into one magazine its Meiji Bunko, Shunka Shuto, Sekai Bunko, Itsuwa Bunko, Bungei Kyoshinkai, and the other literary serials it had issued up until that time.

This magazine received the full support of its readership and became the major literary journal during the period it was in print. Takekurabe by Higuchi Ichiyo was first printed in a single issue of Bungei Kurabu, gaining Ichiyo fame and establishing her position in Japanese modern literature. Other major authors who submitted to the publication are, Izumi Kyoka, Ozaki Koyo, Tayama Katai and Yamada Bimyo. Also, every issue featured wood block prints and illustrations by numerous artists, such as Kaburaki Kiyokata, Kobayashi Kiyochika and Takeuchi Keishu.

These magazines contain many valuable photographs of geigi (geisha/geiko), actors and entertainers, along with articles commenting on the trends and mores current at the time. This collection of primary sources will prove instrumental for research in modern literature as well as the study of art, theater, rakugo, social customs and many other areas significant for the understanding of modern Japan.