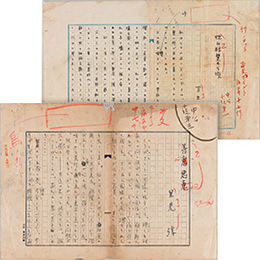 Digitized manuscripts of 213 works by 67 authors, including correspondence addressed to Chuo Koron literary magazine chief Takita Choin, as well as 209 works which first appeared in that magazine.

This is a graphic database of over 10,000 pages of manuscripts from among the manuscripts and letters received by Takita Choin that were donated to the Museum of Modern Japanese Literature in 2010 by the family of the late Takita Choin, former editor-in-chief of Chuo Koron. A total of 213 literary works comprising of 10,293 pages of manuscripts from 67 authors, as well as 2,638 cuttings (including covers, tables of contents and copyright pages) of two-page spreads of 209 literary works first published in Chuo Koron between 1915 and 1925 are all available as full-color graphics. In addition, the “Commentary and Bibliographic Notes to the Compendium of Manuscripts by Modern Literary Authors from the former collection of Takita Choin” is also included for reference.
Authors include Shiga Naoya, Tanizaki Junichiro, Satomi Ton, Tokuda Shusei, Muroo Saisei, Nogami Yaeko, Uno Chiyo. Not only can manuscripts by cultural personalities and academics such as Tokutomi Soho be browsed, it is also possible to simultaneously read and compare the manuscripts with the actual magazine pages, and moreover to print them out in their original forms for reading off-screen.