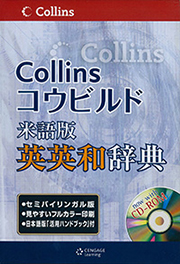 Authentic English language dictionary with example sentences in Japanese to illustrate meaning. Ideal for beginning students to get acquainted with an English dictionary. Includes pronunciations.

COBUILD is a joint research project by Collins, a major British dictionary publisher, and the University of Birmingham. The COBUILD Advanced Learner's English Dictionary, which was developed based on The Bank of English™, a corpus of roughly 650 million words, is an epoch-making dictionary of living English.
Here, we have taken the dictionary of American English unabridged, and added Japanese, including definitions, examples, and explanations of expressions targeted at Japanese learners, creating the first English and English/Japanese COBUILD dictionary.
The full-sentence definitions that are a special feature of COBUILD provide readers with a precise understanding of the meaning of words and phrases, helping them not only to build their vocabulary but giving them mastery of the actual use of expressions and allowing them to express themselves in simple and natural English.
Also, a sound button appears with each word, allowing users to hear the word pronounced correctly by a native English speaker.
The Bank of English™
The Bank of English™ is a 650-million word database of written and spoken English. The corpus contains several hundred types of written and spoken English from 1990 onward. Approximately 40% is British English, 30% is American English, and the remaining 30% is made up of Australian, New Zealand, and Canadian English.
The examples of written English are taken from a variety of sources, ranging from newspapers, magazines, TV and radio programs, and books from around the world, to websites, flyers, catalogs, reports, and letters. The examples of spoken English are taken from recordings of everyday conversations, meetings, interviews, and discussions, as well as TV and radio programs. Of the total database, approximately 40 million words are taken from spoken sources.