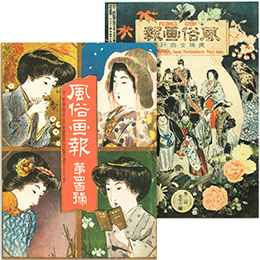 The first issue of Fuzoku Gaho, released in 1889 by Toyodo publishing house and continued to be sold for 27 years until 1916, was the first graphic magazine produced in Japan, and is also known as a major journal source for the research of customs and social mores.
The magazine contains a total of 518 issues covering content pertaining to social and cultural trends and conditions in the Edo, Meiji and Taisho periods, customs, history, literature, things/objects and affairs, geography (regional and world), war and disasters. Feature articles were first accompanied by lithograph illustrations that were later replaced with photography, and so the magazine assumes the characteristic of an illustrated encyclopedia for matters concerning the early modern and modern periods.
Publications featured special series, such as a number of meisho zue (illustrated guides to famous places) series, taking up the Shinsen Tokyo Meisho Zue, Yokohama Meisho Zue, and Kyoto Meisho Zue, and also one-theme extra issues, such as the Seiro Zue (photo journal of the Russo-Japanese War) and the Tokyo Kangyo Hakurankai Zue (the industrial exposition in Tokyo). These issues have often served as single sources for research and study.
Not only does it serve academic specialists of history, cultural mores and literature, it has also proven valuable as a historical and socio-cultural guide map for utilizers in various other fields.
Editorial supervisor: 槌田満文
Editors: 大串夏身・横山泰子