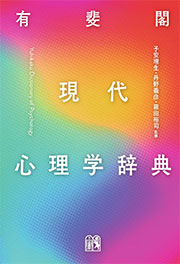 A definitive dictionary of psychology that covers the latest trends in the entire field from basics to applied psychology.

Published in 2021, the Yuhikaku Dictionary of Psychology is a major revision by over 300 writers of the forerunner “Dictionary of Psychology” (published in 1999). The dictionary consists of three parts. In addition to the entries for general psychology, a section containing entries related to the Certified Public Psychologist has been created, and a separate section containing biographical entries is also included. Adding the “miyo” (direct reference) entries to the 3,600 general psychology entries, 157 entries related to the Certified Public Psychologist and 210 biographical entries, the number of entries for the whole dictionary totals 5,200.
The Act on Certified Public Psychologists, enacted in September 2015, established a national qualification in the field of psychology. Based on the new act, the names of laws and ordinances, facilities and organizations, qualifications and specialists essential for Certified Public Psychologists have been included and explained in the dictionary, making this dictionary a useful asset in the actual work of Certified Public Psychologists as well as for exam preparation.
For the biographical entries, as well as listing the birthplace, academic career, and posts held by the person, an effort has been made to make it possible to understand the historical time in which the person was active. Further, by indicating the birthplace and where the person moved to on a biography list map with illustrations (included in the list of figures, tables and video contents in the appendix), it is easy to see at a glance information such as where the person was active during the two great wars of the 20th century.
Not only have additional entries been established for many new terms, reflecting the changes in the field over the last 20 years, brief explanations in plain language along with enhanced “miyo” (direct reference) entries and related entries (placed at the end of each entry) support systematic and well-organized learning for a wide range of learners from beginners to people working in the field of psychology.
The JapanKnowledge version has added a function whereby a follow-on search can be swiftly made from the words indexed below the main text. In addition, the online version contains an alphabetically ordered “quotes and reference literature list” that is not included in the book version. Furthermore, approximately 90 items of materials such as figures and videos not included in the book version can also be browsed in the list of figures, tables and video contents.