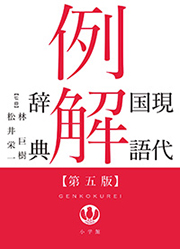 Since the publication of the first edition in 1985, the “Dictionary of Modern Japanese with Example Sentences” has become the favored companion of a broad range of people from high school students to ordinary members of society as a dictionary that is “user friendly and easy to understand.” Especially in schools, it has also become the established favorite as “the dictionary most often selected by teachers of Japanese.”

The fifth edition has been revised by making full use of the Japanese corpus of the National Institute for Japanese Language and Linguistics for the first time with a Japanese language dictionary. The use of the corpus has enabled more than ever before to explain how “contemporary” Japanese (the standard national language) is used through abundant example sentences.

The “Corpus Columns,” which use graphs to demonstrate Japanese usage frequencies, and “Synonym Comparison Tables,” which present example sentences to distinguish between the usages of synonyms in different situations, are popular contents that support learning in an easy-to-understand format.

The JapanKnowledge edition enables searches not only for word entries but also for idioms and proverbs. In addition, the contents of both the “Commentary on Particles and Auxiliary Verbs” and the “Compilation of Onomatopoeic and Mimetic Words” in the appendix are arranged as separate entries that make it possible to explore the details of subtle differences in word usages.