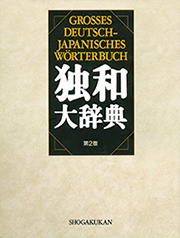 Japan's largest German-Japanese dictionary, with additional roles as encyclopedia, dictionary of specialist terms, and guide to pronunciation and vocabulary, with a total 160,000 headwords and 180,000 example sentences.

First published in 1985, Shogakukan Grand German-Japanese Dictionary (2nd edition) has a total of 160,000 headwords and 180,000 usage examples, making it Japan’s largest German dictionary for the serious user. With additional roles as an encyclopedia, pronunciation guide, thesaurus and technical dictionary, it is the first choice for businesspersons, scholars and learners.
The JapanKnowledge edition contains audio data for about 10,000 headwords. Users can listen to the pronunciation by clicking the audio button. Care is especially taken to make it easy to read and understand for the user. For example, the part of speech, category of technical term, and other information in the entry are presented in their full form whenever possible so they can be instantly understood. Headings of compound words are spelled out in their entirety instead of abbreviated. Instead of “~” in usage examples, the full word is used.
* The contents of the dictionary rely on the old orthography. However, headwords are given in both the old and new orthographies whenever possible to facilitate search. More details here (in Japanese)
Editorial committee:  Kunimatsu Koji, Iwasaki Eijiro, Hashimoto Ikuo, Hamakawa Sakae, Onodera Kazuo, Harada Takeo, Sengoku Takashi, Nakajima Yuji, Hirao Kozo, Mishiro Mitsuyoshi, Narahara Yoshiyuki, Nitta Haruo