(The Comprehensive Dictionary of Dialects in Japan) 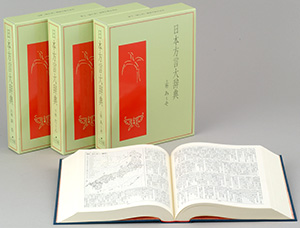 A lexicon of dialects with 210,000 entries from Hokkaido to Okinawa, this compilation is searchable both by dialect and by standard Japanese.

Nihon Hogen Daijiten (The Comprehensive Dictionary of Dialects in Japan) is a comprehensive reference compilation with two hundred thousand entries of local vocabulary found in the dialects dispersed throughout Japan (Hokkaido to Okinawa).
This lexicon of dialects is a collection of terms found in over one thousand linguistic sources, such as glossaries of regional language that have been edited or recorded, from the early modern period until the contemporary period. Each entry is accompanied by its meaning, the region(s) where it is used, example sentences, and a “resource reference number.” If a term from a dialect is found in documentary sources, it is introduced as a “documented example,” allowing for a better understanding of the term’s historical context. An additional feature is a “phonological compendium” for cross-referencing the standard Japanese syllabary with the phonetic units of a dialectal term, along with other resources.
The JapanKnowledge edition includes a “standard Japanese referencing index” allowing the user to find related words in dialects from standard Japanese, a welcome addition to the referencing system that starts with the dialect terms.
With this compilation, Okuni Kotoba wo Shiru: Hogen no Chizu-cho (Learning our country’s languages: a dialect map atlas; Shogakukan) is an extra inclusion. By using the maps found in it, it is possible to see at a glance the range covered by the various dialects. Not only can the dispersion and transformation of a particular dialectal form be ascertained, the user can read detailed analyses and related columns.

Another convenient function is the “resource reference number” (in blue), which, when touched with the cursor, makes a pop-up window appear providing bibliographical information, such as the title of the original source, author or editor, and year of creation or publication.