Dictionary of Laws of Natural Science 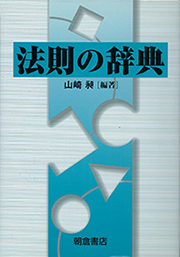 With progress in knowledge and the subdivisions of academic fields, the world has become inundated with laws and theories. This dictionary contains a selection of laws, rules, principles, effects, phenomena, theorems, and formulas and equations in the natural sciences, with concise explanations.
The dictionary includes more than 4,400 laws, in various fields of the natural sciences including mathematics, physics, chemistry, biology, geology, astronomy, and medicine. All entries are also searchable by the English names provided. Further, all 70 illustrations in the book are included, and there are links to related entries.

In academia, there are cases, such as "Bernoulli's principle," "Bernoulli's theorem," and "Bernoulli's equation," where the same phenomenon is described using different terms depending on the discipline. By contrast, there are instances where completely different phenomena in different fields happen to be described using the same term. One of the joys of using this dictionary is that, thanks to its cross-disciplinary content, it allows you to discover such instances.
Compiler: Yamasaki Akira