Iwanami Dictionary of the Japanese Language 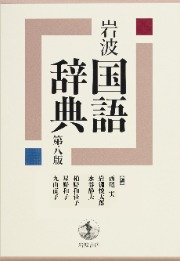 Latest edition of the Iwanami Japanese Dictionary focuses on the Japanese language as it has transformed over the past century, with the addition of 2,200 new entries.

Boasting nine million copies since the first edition was published in 1963, the Iwanami Japanese Dictionary is back with this latest edition. This dictionary focuses on the Japanese language as it has transformed over the past century. In this 8th edition, special care has been taken to modernize not only the way that words are explained, for greater ease of use and understanding, but also the content itself, revising the substance and expression of all entries, in order to reflect developments in Japanese language over the past decade.

Responding to changes in society and daily life, a total of 2,200 new entries and definitions have been added, such as "win-win", "diversity", and "hiyarihatto" (close call; near-miss), giving attention to fields including science and technology, cooking, sports, and caregiving. Along with abundant example sentences and our very own word class display to indicate actual usage and connections of terms, a variety of detailed supplementary explanations are given under the symbol ▽ including changes in usage, cautions, word form variants, and original spellings of foreign loanwords.

Having inherited editorial principles such as “interpret, don’t just rephrase” and “focus on modern language from the latter half of the Meiji period,” we have maintained an emphasis on illustrating practical examples, striving to increase descriptions of example sentences. These too are some of the features of this publication. We hope you will find a wide range of applications for this Japanese dictionary containing the necessary terms for modern usage, encompassing speaking, listening, reading, and writing.