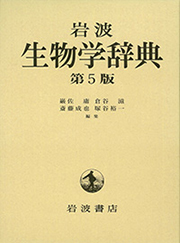 Latest edition of the comprehensive dictionary covering biology and peripheral fields, reflecting new findings since the decoding of the human genome.

The latest edition of the dictionary that has supported Japan’s biological sciences for half a century since the first edition was published. This is the standard for general dictionaries of the biological sciences, covering the entire field of biology and related areas. Since the publication of the 4th Edition in 1996, humanity has moved forward toward scientific elucidation of the phenomena in all areas, including the sequencing of the human genome. Reflecting the great innovations and accumulation of knowledge in biology, this indispensable volume defines the norm for knowledge of the life sciences as humanity looks out on the 21st century, said to be the era of the coexistence of species. Under a new editorial team, over 400 experts have carried out a thorough verification of all entries, and more than 1,000 new entries have been added. Related entries have been integrated and systematic commentaries incorporated. The well-received taxoboxes (tables/boxes of taxonomic data) have also been comprehensively revised.

For everyone who has an interest in biology, including students, researchers and educators.