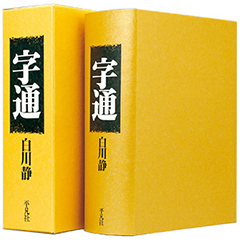 The monumental work completed over thirteen and a half years by Shirakawa Shizuka, the great authority in this field. With 9,500 kanji entries, all essential character forms are covered.

Jitsu is the kanji dictionary completed over thirteen and a half years by Mr. Shirakawa Shizuka, recognized as the foremost kanji researcher, as the last installment of the great trilogy of kanji culture research, following Jito and Jikun.

The JapanKnowledge edition of Jitsu enables full text search, including not only headline entries such as kanji entries and compounds, but also entries by meaning, or citation. Different kanji with the same Japanese reading, book titles, and author’s commentary, all of which were separately compiled as appendices to the print and CD-ROM editions, are now fully linked to the main text screen, making corresponding locations fully accessible. All character forms appearing in the printed edition are fully loaded, including ancient Chinese inscriptions on oracle bones, tortoise shells, and bronzes. All 9,500 kanji entries are displayed, without the need to install a new font.

In addition, advanced search includes those categories particular to a character dictionary, such as by character class, style or form, radical, stroke-count, and four-corner stroke classification.