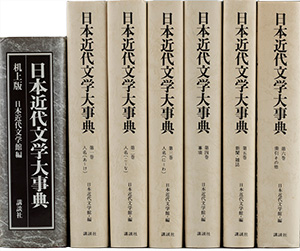 This finest and largest dictionary of literature captures the entire spectrum of Japanese literature from the Meiji period to the present.

Said to be an unprecedentedly grand project realized through cooperation between literary circles and academia, the Great Dictionary of Modern Japanese Literature was edited and published by the Museum of Modern Japanese Literature after six years of work (in six volumes by Kodansha, 1977 to 78). JapanKnowledge has now digitized the desktop edition, published by Kodansha in 1984, six years after the original edition. The desktop edition is a separate one-volume biographical dictionary that was reedited and enlarged from the original Volumes 1 to 3. To this have been added digitized versions of Volumes 4 and 5 of the original edition. Furthermore, a database has been compiled from the entire digitized edition, necessary modifications completed, and new entries also added.
The original edition consists of six volumes. Volumes 1 to 3 comprise a biographical dictionary (5170 entries) of people, in addition to novelists, critics, playwrights, poets, tanka and haiku poets, who were active in various fields related to literature after the inception of the modern era. Volume 4 consists of descriptions (660 entries) of important literary events, schools of literature, organizations, controversies and special terms of the modern era of Japan, as well as the impacts of foreign literature. Volume 5 is a dictionary of newspapers and magazines (1600 entries) that focuses on literary magazines for novels, criticism, plays, poems, tanka and haiku, but also describes general magazines and magazines related to areas such as thought, art, and entertainment, as well as newspapers that have deep connections with literature. Lastly, Volume 6 contains an index and other materials, including a comprehensive list of various literary series, complete collections of literature, and anthologies, as well as a history of aspects of publishing in the modern era.
This digital edition of the finest and largest dictionary of literature, capturing modern literature from a very broad perspective, will continue to expand by increasing the number of entries while implementing regular updates.
Edited by the Museum of Modern Japanese Literature in cooperation with the Japan Writers’ Association
Editorial Committee: Ando Hiroshi, Ishikawa Takumi, Ishida Hitoshi, Ohara Yuji, Odaira Maiko, Kono Kensuke, Kono Tatsuya, Kotani Eisuke, Gomibuchi Noritsugu, Shinozaki Mioko, Shoji Tatsuya, Deguchi Tomoyuki, Toba Koji, Nakajima Kunihiko, Nakaya Izumi, Hibi Yoshitaka, Munakata Kazushige