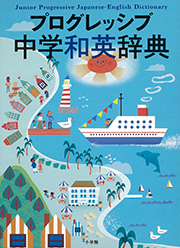 The greatest amount of information for both headwords and example sentences. An English dictionary that makes it possible to say what you want to in English.

The Junior Progressive Japanese-English Dictionary, containing a total of 19,000 main headwords, sub-headwords and compound words, as well as 14,800 examples of usages, is a Japanese-English dictionary which has the greatest volume of information when compared with similar dictionaries. The large-scale Japanese language corpus of the National Institute for Japanese Language and Linguistics was used to determine the headwords and the dictionary contains a large number of words in common everyday usage that for some reason have not appeared in previous Japanese-English dictionaries for junior high school students. Further, for headwords that have many meanings, a list is displayed that makes it possible to search quickly for expressions you want to say or write. The list is arranged in such a way that you first check the expression you are looking for in Japanese and can then swiftly learn the correct English expression. The example sentences have been gathered from the “expressions I wanted to say but couldn’t” mentioned by junior high school students in class or in homework, and since the example sentences have been adopted by analyzing this data, the dictionary is full of vivid and easy-to-use examples. In addition, attention has been paid to using full sentence examples, which, as far as possible, enable students to understand how they are actually used.

The Appendix also contains, for example, a picture dictionary and examples of conversations organized by theme as well as simply arranged examples of letters that can be used as they are. These can be easily browsed in the reference materials window in the main screen of the dictionary along with a table of phonetic symbols and an index of boxed articles.