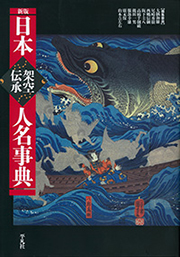 Unique biographical dictionary covering everything from historical figures to fictional heroes. Searchable by person name and by quoted source.

This volume is the newly revised edition of the Dictionary of Japanese Fictional and Legendary Characters; Updated and Expanded Edition published in 2000. Entries have been added and amended. Names of characters included in this edition range from gods found in Kojiki (Records of Ancient Matters) and Nihonshoki (Chronicles of Japan), figures appearing in fairy tales and stories fondly remembered by the Japanese people, and famous persons after World War II, to creations such as Ultraman from TV, novels, movies, and other media. Each entry includes the content of the legend or story featuring the character and biographical facts related to any real person behind the myth. The Dictionary also provides commentary along with wealth of citations from the original text.
Besides searching the names of characters, users of the JapanKnowledge edition can also perform full-text search and look up titles of citations and sources. A list of citations is also available as a supplement for perusal.
A wealth of characters are produced by folk tradition and the imagination of a vast number of authors. The names of famous characters are also passed down through time as the content of their stories change. If we reexamine the world of folklore as it is, which heretofore has been rejected as contrary to reality and as falsehoods, and find new meaning in their stories, we will discover that the past to which we direct our gaze will become all the more vivid.