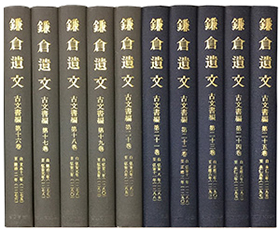 Kamakura Ibun (Collection of Historical Materials of the Kamakura Period) comprises 42 volumes with 4 ones of supplementary materials published by Takeuchi Rizo (1907-1997, former head of the Historiographical Institute of the University of Tokyo, Professor Emeritus of the University of Tokyo, Honorary Doctor of Waseda University) over a period of 24 years from 1971(Showa 46). Thus, it is a complete collection of all roughly 36,000 antique texts from the Kamakura period.

The most important feature of this web version is that a type-page of the book can be browsed on the same screen as a keyword search. Illustrations and genealogical charts are also displayed, this being impossible with the CD-ROM version. A link function to the Historiographical Institute of the University of Tokyo “Union Catalog Database of Japanese Historical Documents” has also been provided, making it possible to access various kinds of information through the use of this Web Version of the Kamakura Ibun.