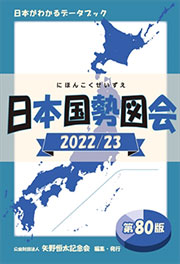 The long-selling Nihon Kokusei Zue (Graphs and Tables of Japan’s National Census) has been published continually since its first edition by Tsuneta Yano (1866-1951, founder of The Dai-Ichi Life Insurance Company, Limited.) in 1927. In the preface to the first edition, expressing his passion for education, Yano wrote, "If the editor were an educator, and if I were to have several young people placed under my charge, whatever department they were studying in, it is the contents of this book that I would wish to teach to all of them. This book is one part of the youth academy without a lecture room. " The first Japanese national census was compiled in 1920. At the time of the publication of the first edition of this book, the census statistics were still not sufficiently well organized, thus requiring the dissemination of statistics that would cultivate young people's ability to make objective judgements. It is from such an era that this book has been repeatedly published over the years, down to the present day, as one of the important Japanese statistical yearbooks.
Nihon Kokusei Zue is a data book that employs statistical tables and graphs to provide easy-to-understand commentary on Japan's social and economic situation based on materials published by government-related organizations, such as ministries, agencies and other public offices, as well as materials resulting from surveys and research conducted by all kinds of industrial organizations and think tanks. The yearbook encompasses a wide range of themes, such as the national territory and climate, population, labor force, agriculture and agricultural produce, all types of industries, commerce, finance, monetary conditions and the people's livelihoods. In addition to statistical tables and graphs, each chapter contains a commentary, an explanation of terminology, and articles on a wide range of topics in order to deepen understanding. Furthermore, to view Japan's economy in the context of globalization, international comparisons are also provided regarding the important themes in each chapter. Finally, important long-term statistics from which trends since the end of the Second World War can be seen, and statistics for each prefecture that enable a comparison of Japan's major administrative districts are also provided.
Perhaps reflecting Tsuneta Yano's passion for education, Nihon Kokusei Zue has thus far been used primarily in educational circles. The yearbook is even today quoted in school teaching materials such as social studies textbooks, reference books and exercise books, and is employed each year as a sourcebook for the writing of questions for junior high school, high school and university entrance examinations. In school education in recent years, the role of this yearbook has gained in importance due to the need to cultivate the abilities of deriving information from and explaining data. Not limited to education, opportunities for making use of Nihon Kokusei Zue have also increased in business situations and as a handbook for "relearning" Japan's statistical circumstances after retirement. Since the publication of the first edition, Nihon Kokusei Zue has progressed through the three eras, Showa, Heisei and Reiwa. We sincerely believe that this yearbook will be of assistance in capturing Japan's current situation as well as being an aid for considering the future of this country.

The JapanKnowledge edition enables heading searches for the titles of graphs and tables as well as full text searches for material sources and annotations.

The "Zue" of Nihon Kokusei Zue and Sekai Kokusei Zue is used to refer to a "collection of illustrations" in order to explain a certain matter.
The oldest use of the term "Zue" in a title is found in the "Wakan Sansai Zue" (first published in 1712), a pictorial encyclopedia that gives illustrated explanations about everything that was known at the time.
Entitling his publication Nihon Kokusei Zue, Tsuneta Yano had in mind the image of an illustrated encyclopedia that would give an overall view of Japan's national census.