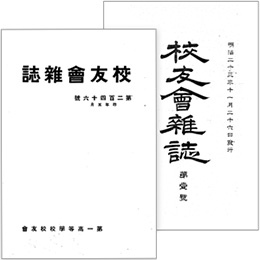 The magazine which vividly records the mentality fostered within this elite high school from the pre-war period. Published from Meiji period until during WWII, launching the careers of many writers and critics along the way.

Many of the students of the Dai-ichi Koto Gakko were prominent among those who worked to establish the modern Japan in wide-ranging fields such as academia, the arts, politics, the economy and education. This magazine stands as a spiritual record of the youthful times of those figures.

Dai-ichi Koto Gakko was abolished after the Second World War, and the Koyukai Zasshi was also discontinued in 1944 after having been renamed the Gokokukai Zasshi (Magazine of the Association for the Protection of the Country) during the War. However, the cultural mechanism of the high school and university intramural magazine that traces its origins from the Koyukai Zasshi has been passed down to the present day, with many schools issuing their own magazines.

Most of the students at the former Dai-ichi Koto Gakko were gathered there from locations all over the country, where they had been acclaimed as young persons of outstanding abilities. All the students were housed in the school dormitory, where they developed their talents through friendly rivalry. The students had a conspicuous air of elitism about them, but they established their characters while facing the times with a sincere attitude and with concern for the changes brought about by the progression of the era. These young people built up the intellectual and literary worlds of modern Japan in this magazine, which differed in character from commercial magazines. The theoretical writers included, for example, Ishihara Ken, Abe Jiro, Watsuji Tetsuro, Kurata Hyakuzo, Tanikawa Tetsuzo, Hayashi Tatsuo and Hani Goro. Literary writers included the generation from Kawabata Yasunari with his Chiyo that can be said to be the original form of Izu no Odoriko, and Tanizaki Junichiro, through the generation including Jinzai Kiyoshi, Hori Tatsuo and Takami Jun, and on to the generation of Fukunaga Takehiko, Nakamura Shinichiro, Kato Shuichi and Kiyooka Takayuki, whose works published in the magazine would prefigure their later achievements.

This magazine is thus a treasure that records the youth of these highly talented people who later went on to attain greatness in both the academic and artistic worlds.