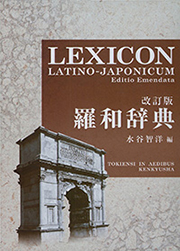 Compiles a wide-ranging 45,000 terms from Ancient Latin to modern technical terms. Also searchable from Japanese as a Japanese-Latin dictionary.

With a total of 45,000 words, the Lexicon Latino-Japonicum includes a wide range of terminology, covering everything from old Latin to modern-era technical terms. The volume will be of use not only to learners of classical language, but also to those with an interest in other areas such as religious music, as well as to those seeking the scientific names of plants and animals. Abundant examples cited from Latin literature are all accompanied by references (author names), and place and people names, and the names of gods and characters from myths, are also listed along with their katakana readings, making the volume useful as an encyclopedia for Western classical scholarship.
In the JapanKnowledge edition, a Japanese-Latin lexicon has been incorporated in the form of a Japanese-Latin dictionary, enabling users to also search terms in Japanese. The volume also includes inflection and conjugation charts, making it a useful study resource.
Editor: Mizutani Tomohiro