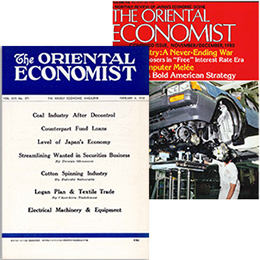 English-language economics magazine published uninterrupted for 51 years before, during, and after World War II. Founded by Ishibashi Tanzan, for overseas dispatch.

The ORIENTAL ECONOMIST was a monthly English magazine launched in 1934 (Showa 9) to commemorate the fortieth year of the founding of Toyo Keizai Inc. (Toyo Keizai Shimposha). This was in the age of the rise of nationalism, when the principle of international cooperation was obscured in the shadows and Japan had just withdrawn from the League of Nations in March of the previous year, 1933. Due to the policy of reinstatement of the embargo on the export of gold in December 1931 (Showa 6), Japan’s currency market had declined. As that was accompanied by an increase of exports from Japan, the criticism by foreign countries, such as Britain, that Japan was engaging in exchange dumping became a serious international economic issue in an environment where Japan’s continental policy and withdrawal from the League of Nations was being viewed with concern. Ishibashi Tanzan, editor in chief and president of the Toyo Keizai Shimpo therefore decided to publish an English-language magazine due to an awareness that the real situation in Japan, now the focus of world attention, was not correctly understood after the Manchurian Incident. By presenting to the world accurate information on the economy, politics and society of Japan and Asia, and accompanying this with commentary from the viewpoint of the common people of Asia, Ishibashi desired to gain the understanding and fair-minded judgement of Western citizens, and contribute to the maintenance of peace.

Care was taken to present articles in readable English, rather than word-for-word translations, to non-Japanese readers unfamiliar with Japan’s politics and economy. The editorial policy was also intended to lay bare the strengths and weaknesses of the Japanese economy, and indicate the direction it should take in the future, rather than to simply print propaganda. This made it possible to maintain a standard that was not at all inferior to similar magazines in other countries, and contributed to the gaining of trust by overseas experts. The issues reached not only the Axis powers of Germany and Italy, the neutral powers of Switzerland, Sweden, Portugal and the Soviet Union, Japanese occupied Hong Kong, Shanghai and Singapore, but also the Allied powers such as the UK and USA via neutral countries. The magazine was read by the bureaucratic and military officials of many foreign governments, among them Colonel Kramer, the first chief of the post-war GHQ Economic and Scientific Section, who was a long-term reader in the US. According to Ishibashi Tanzan, the magazine frequently came under fire from Japanese expats (working at embassies, banks and corporate branches overseas) as “doing Japan more harm than good for expressing views that were too close to reality.” Interestingly enough, the Japanese military authorities did not cut off the magazine’s printing paper rations even during the Pacific War as they saw the value in the only magazine trusted by people overseas. With the exception of the combined issues of July-August and October-November 1945, immediately after the end of the war, the magazine was published monthly without a break from the founding issue—no mean achievement considering that many magazines were forced either to be merged or cease publication during the war years.

As there was no reliable private institute conducting economic surveys in Japan after the war, Ishibashi Tanzan, who received an early request for cooperation from GHQ due to its high assessment of the magazine, realized he had an opportunity to put forward Japan’s views, and thus switched the publishing cycle of the magazine from monthly to weekly. As a result, the magazine was published weekly from January 12, 1946 to August 23, 1952. The ORIENTAL ECONOMIST is therefore unique in that it increased its frequency of publication, while the publishing activities of many other media were on the decline during the occupation.

This new digital archive consists of 874 issues covering the 51 years from 1934 to 1985, all 43,861 pages of which are searchable. The archive contains not only articles from the Toyo Keizai Shimpo/Weekly Toyo Keizai translated into English but also many original articles, which are of special interest as articles for the domestic magazine and The ORIENTAL ECONOMIST, intended for the overseas readership, were composed differently under the intense suppression of journalism that occurred during the war years. A rare English-language magazine that continued without interruption from pre-war to post-war Japan, this archive represents a valuable academic research tool in the current situation where serious research using this resource has barely begun.