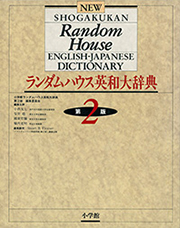 Japan's largest English dictionary, including English from beyond the Anglo-American sphere, with 345,000 words and 175,000 example sentences, also covering grammar and etymology.

The revised second edition of this reputable full-scale English-Japanese dictionary. With 345,000 entries, the Random House English-Japanese Dictionary contains the greatest number of terms, including derivatives, variants, and idiomatic phrases. Along with the addition of 30,000 headwords and 50,000 definitions not found in the US second edition, the addition of 110,000 example sentences to the US edition’s 65,000 brings the total to 175,000 example sentences.
Not only are the example sentences and usage of modern English given detailed explanations, but spoken language, slang, phrases, and proper nouns such as names of persons and products are widely included, in addition to English from areas somewhat underrepresented in the US edition, such as Britain, Canada, Australia, and New Zealand, extending also to the Third World including Africa, and Central and South America. Abundant with encyclopedic features including large numbers of maps and illustrations, this is a must-have dictionary for English-language researchers.
In the JapanKnowledge edition, voice data is added to approximately 100,000 English terms, whose correct pronunciation can be checked by clicking the sound button. Even a vaguely remembered English term may be tracked down with its correct spelling and meaning by entering the kana for its pronunciation using the phonetic search function.