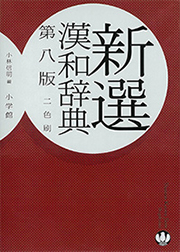 Definitive edition of the kanji dictionary for learning and practical use, compatible with the New List of Kanji Characters in Common Use. Contains 11,500 kanji entries and 55,700 compounds.

This dictionary is based on the eighth edition of the Shinsen Kanwa Jiten, a revised version of a complete original Chinese-Japanese character dictionary fully conforming to the New List of Kanji Characters in Common Use (Shin Joyo-kanji Hyo), announced in the fall of 2010. Revisions, such as to examples of usage and character compounds, have been carried out to make this an excellent dictionary for both language study and practical use.

The dictionary gives a full listing of the JIS Level 1 to Level 4 kanji and supplementary kanji.* To deepen understanding of the kanji entry, every effort has been made to include additional important information on kanji, such as boxes for meanings, explanations of the derivation of forms, usage, non-standard variants and diagrams showing the original and derived definitions. In addition, the dictionary contains not only important words from Chinese classics and idioms derived from historical events or Chinese classical literature, but also expressions that aid in the reading of Japanese classics and that are necessary in daily life in Japan.

* In the Shinsen Kanwa Jiten, web edition, changes have been made from some of the kanji entries in the printed book edition. For details, please see here (in Japanese).