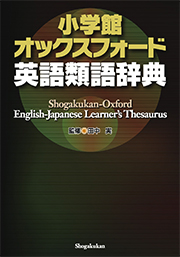 Words useful for Japanese users carefully selected from the Oxford Learner’s Thesaurus. The largest and most detailed English thesaurus.

The Shogakukan-Oxford English-Japanese Learner’s Thesaurus is a Japanese edition of the Oxford Learner’s Thesaurus: A dictionary of synonyms. While not in any way diminishing the outstanding features of the original thesaurus’ huge number of synonyms, detailed commentaries, and abundant examples of real-life English, approximately 1,300 entries considered to be helpful for Japanese users have been carefully selected. A unique index makes it possible to look up words from Japanese as well as English.

The thesaurus contains a total of roughly 10,000 synonyms and 26,000 examples of usage. Moreover, the Japanese edition is chock-full of information for writing and speaking better English, such as approximately 2,600 notes and columns that explain the differences and usages between synonyms, 123 “synonym scales” that use arrows to show the intensity of meaning between synonyms visually, and “sentence pattern collocations” that make it possible to see words that are strongly linked to sentence patterns.

As well as enabling searches for main headings, synonym headings and derivatives, the JapanKnowledge edition also contains a “Japanese synonym list” that acts as a Japanese index listed according to the Japanese hiragana order. Not only is it quick and easy to find the desired word from the Japanese, it is also possible to search for English synonyms from the Japanese words contained in the list.

This thesaurus is an absolute must for businessmen and other professionals who need to use English, as well as learners of English who wish to further improve their vocabulary.

This dictionary is based on the Oxford Learner’s Thesaurus: A dictionary of synonyms, as shown below, and has been translated into Japanese while carefully selecting words thought to be useful for Japanese users.