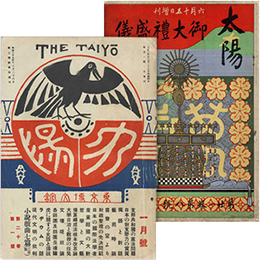 Taiyo was a comprehensive magazine published by Hakubunkan publishing house from January 1895 to February 1928, for a total of 34 volumes containing 531 issues amounting to approximately 175,000 printed pages. It not only offered political, military, economic and social commentary, but included articles on the natural sciences, literary works and cultural trends and mores written by about 6,500 authors. Although considered indispensable for the study of Japan’s modern period, it’s massive volume and extensive range along with the rarity of extant original copies has made it difficult for researchers to approach this most prominent of Japan’s comprehensive serial publications.

By successfully launching magazines such as Bungei Kurabu, Shonen Sekai and Bunsho Sekai, Hakubunkan was able to establish itself among Japan’s major comprehensive publishing houses. Taiyo is considered to be the flagship publication of Hakubunkan.

In 1894, the company discontinued printing political and economic journals to meet the needs of a society in transition following the first Sino-Japanese War by launching a comprehensive magazine that covered all areas of society, the nation and the world, establishing Taiyo successfully in the role of opinion leader for its readers.

Also, Taiyo lists over 200 people from various walks of life as honorary supporting members, and article submissions were received from an exhaustive representation of notable individuals from all social and public worlds. Starting publication earlier than Chuo Koron and Kaizo, it is Japan’s very first comprehensive magazine.