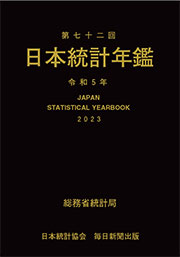 Updated each year, the Japan Statistical Yearbook is indispensable for all your statistical data needs.