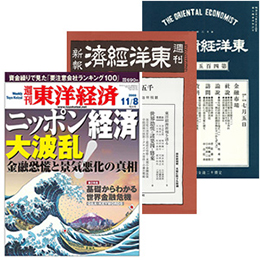 Toyo Keizai Shimpo / Weekly Toyo Keizai was inaugurated in Meiji 28 (1895), when Japan’s economic modernization began activities that would send ripples through history. At the time, there was great anticipation for a business and financial magazine that would monitor the government, advise businesspersons, and inform readers about the world economy. With freedom, democracy, and international peace as its basic principles, it developed a unique voice on a wide range of topics, from government rule to social criticism. It engaged in thoroughgoing criticism of Japan’s foreign expansion and imperialism from the principle of “small Japan,” argued for lifting the gold export embargo, called for universal suffrage—an appeal ahead of its time—and opposed the country’s withdrawal from the League of Nations. Representative critics of the time who wielded the pen for the magazine include Tanzan Ishibashi, who would later become prime minister, Amano Tameyuki, Miura Tetsutaro, and Takahashi Kamekichi.

Toyo Keizai Shimpo started with a publishing schedule of three issues per month, and then quickly moved to a weekly schedule in Taisho 8 (1913). What should be noted is that with the exception of three scheduled issues in September 1923, when printing and delivery were disrupted by the Great Kanto Earthquake, the publication has continued uninterrupted to the present day. Even during the Second World War, when restrictions toughened as speech was suppressed and the press controlled through the supply of paper, the magazine withstood various pressures and continued its original expression of views without being hindered. From the end of 1944 to August 1945, as the frequency and intensity of the Tokyo air raids grew, many weekly magazines were forced to become monthlies or cease publication. Weekly Toyo Keizai, however, tenaciously avoided this fate by transferring its production facilities to Yokote City in Akita Prefecture. After the war, it continued its weekly schedule as affirmed by its title, even during the Allied occupation of Japan. As a result, all of its issues remain in existence.

The second phase digitized content includes 70 years of publication, approximately 3,500 issues, from Showa 21 (1946) to Heisei 27 (2015), and is now part of the searchable digital archive. This period covering the 20th and 21st centuries includes notable periods such as the Allied Occupation of Japan, post-war recovery and following high economic growth, the “oil-shock,” collapse of the economic bubble and subsequent long-term recession.

The archive, which now contains the complete set of 5,800 issues, spanning more than 120 years, is an essential resource for academic research, not only in economic, modern and Asian history but also in other areas such as politics, diplomacy, the Constitution of Japan, the media, and journalism.