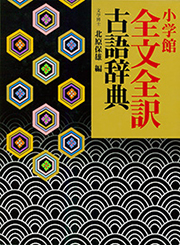 Groundbreaking dictionary of ancient Japanese, using important scenes from classical works in unabridged form as example sentences—the first such dictionary to give an analysis of the parts of speech.

Entries are categorized and marked in three levels according to the degree of importance (962 main entries, with 682 subentries and general entries). Selected major excerpts from classical Japanese literary works that frequently appear in high school textbooks serve as the examples in full text form. For the first time in any classical Japanese dictionary, each full text is accompanied by identified parts of speech and a translated modern Japanese language text.

Various types of classical poems are introduced under the headings “Hyakunin Isshu (anthology of 100 poems by 100 poets),” “Meika Kansho (well-known waka poems)” and “Meiku Kansho (well-known haiku poems),” where the parts of speech used in the poems are identified as well as translated into modern Japanese. The dictionary can therefore be used not only to help understand classical literary works, but to enjoy numerous works of classical poetry.

By an integration of various creative approaches, such as “auxiliary verb lesson at a glance” in a table format, columns explaining classical Japanese in a fun way, and charts, the dictionary has been compiled so that it assists users to understand classical literature more accurately and grasp essential words more easily.

* Not the same as the number of entries in the JapanKnowledge edition.