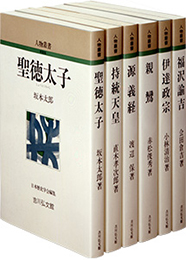 Jinbutsu Sosho is a monumental collection of biographies of historical figures in Japan edited by the Nihon Rekishi Gakkai (The Society of Japanese history) and published by Yoshikawa Kobunkan.

It is a book series of biographies of persons deemed important in Japanese history, including non-Japanese persons, from ancient to contemporary times, covering diverse areas such as politics, economics, literature, religion and arts.

Since its first publication in 1958, the series has attracted many readers over the years as “a biographical read,” and was awarded the “11th Kikuchi Kan Prize,” a testament to its high acclaim as a collection of historically accurate biographies benefiting academic researchers.

Each volume of the series aims to function as a dictionary of a historical figure, providing a full picture of his/her life, authored by the scholar most fitting for the figure in question. The series is coherently structured to withstand the test of time, each volume consisting of chronologically written descriptions, and critiques on popular beliefs and conflicting views, accompanied by references such as a bibliography, genealogy and timeline.

Jinbutsu Sosho is now available on JapanKnowledge, listed under JKBooks, introducing 270 out of the 287 previously published volumes in order of date of publication of the corresponding new editions, released in six parts. In addition to the advanced and full text search function within the “Jinbutsu Sosho” category, cross-referencing searches with other encyclopedias and dictionaries as well as other book series are possible using integrated searches with Knowledge Searcher. This enables thorough and in-depth reading by maximizing e-book potentials. For library use, Jinbutsu Sosho can be utilized as one of the most valuable reference tools for biographies.