(The Great Dictionary of Archaic Japanese) 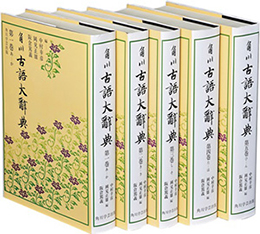 The highest achievement among dictionaries of archaic Japanese, completed through consultation of an assembly of leading authorities in the field. Contains a lexicon of 100,000, spanning ancient and modern, classical and colloquial.

This is the digital version of the epoch-making Kadokawa Kogo Daijiten (The Great Dictionary of Archaic Japanese) in five volumes. It was published after more than 20 years of painstaking and meticulous editorial work, and thus represents the highest achievement among dictionaries of archaic Japanese dictionaries, opening the way for truly precise comprehension of classical Japanese literature.
The largest of its kind among all existing ancient Japanese dictionaries, Kadokawa Kogo Daijiten contains a rich collection of approximately 100,000 headwords, covering historical, classical, and colloquial terms. The dictionary incorporates the latest research findings at the time of publication, in particular for the middle ages and early modern age, for which a large number of words including legal, economic, popular terms and jargon have been selected. Formerly considered to be outside the scope of ancient Japanese dictionaries, this dictionary also endeavors to cover proper nouns, such as personal and place names, with encyclopedic commentaries as well as examples of usage and sources.
Having passed through editorial committees consisting of authorities in the field, this is at present the utmost that one could wish for from a dictionary of ancient Japanese, in terms of content on the origins and history of Japanese, detailed commentaries on the evolution of words and pertinent examples of usage.
In the JapanKnowledge edition, while it is, of course, possible to conduct searches in the historical kana used to display the dictionary headwords as well as in the pronunciations equivalent to these spellings (modern kana readings), search convenience has also been enhanced by the addition, for example, of search keys for contracted sounds, double consonants and voiced or unvoiced consonants. In addition to headword search and full text search, it is possible to conduct searches from various viewpoints, such as limiting the scope of the search only to historical kana usages or designating example sentences or source information in advanced searches. Furthermore, use of the four facet functions available for advanced searches, makes it possible to narrow down search results for instantaneous extraction of the desired entries.

The Database of Pre-Modern Japanese Works is the National Institute of Japanese Literature’s one-stop search portal for information and high-resolution images from classical works. Now, it is available in an image linkage service with the JapanKnowledge edition of the Kadokawa Kogo Daijiten (The Great Dictionary of Archaic Japanese).
From the main text screen on JapanKnowledge, those corresponding images which are contained both in the Kadokawa and in the Database may be viewed in high definition, via the Database viewer. Click here for details (in Japanese).