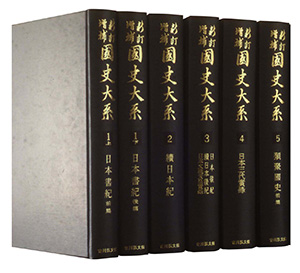 A great compendium that exhaustively and systematically covers the fundamental pre-modern Japanese works of Japanese history research. All 66 volumes are browsable as PDF and full-text search enabled.

The contents include the Kojiki (An Account of Ancient Matters), Nihonshoki (Chronicles of Japan) and others of the six ancient Japanese historical collections; Azuma Kagami (The Mirror of the East), Tokugawa Jikki (True Chronicle of the Tokugawa Period), focusing on histories compiled by the government of the time; private histories such as Honcho Seiki (Chronicle of the Reigns of the Imperial Court), Nihon Kiryaku (Abbreviated History of Japan), Hyakuren Sho (Historical Diaries of Aristocrats), Nihon Isshi (Anecdotal History of Japan), and Zokushigusho (The Continued History of Japan); ancient codes such as Ritsu (The Laws), Ryo-no-Gige (Commentaries on the Ritsuryo System ), Ryo-no-Shuge (Private Commentaries on the Ritsuryo System), Engi Shiki (Ancient Japanese Governmental Regulations), and Ruiju Sandaikaku (Assorted Regulations from Three Reigns); essential tools for studying the names of ancient and medieval people such as Kugyo Bunin (Record of Court Appointments) and Sonpi Bunmyaku (Genealogy of the Aristocracy), and other historical tales, narratives, and collections of works in Kanbun (works in classical Chinese).

While the paper edition of the Compendium of Japanese History has made an enormous contribution to research into Japanese history, the digitalized edition will make a truly incalculable contribution.

The JapanKnowledge edition contains everything from Volume 1 to Volume 60 and the two supplementary volumes for a total of 66 volumes. In addition to the roughly 46,000 pages of typescript PDF files, this edition also includes the entire text data specially proofread for JapanKnowledge.

Not only searches by book name and entry words, but full-text search is also possible for keywords, proper nouns, etc. that appear in the main text. Convenience is further increased by enabling the search to designate the search scope, e.g. to the headnotes, and so on, in the detailed search screen.

Furthermore, by using the facet function, the search result can be narrowed down by book name, era, genre, etc.