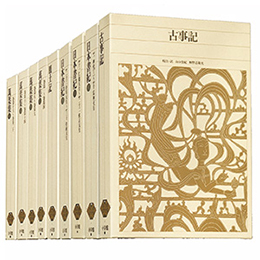 This collection, in 88 volumes, is a well-balanced selection of must-read Japanese masterpieces, including ancient literature such as Kojiki, Nihon Shoki and Manyoshu, medieval literature such as The Tale of Genji and The Tale of the Heike, and early modern literature by Monzaemon Chikamatsu, Saikaku Ihara and others. The collection brings you all the fascination of classical literature.
The texts are based on the best originals available. Notes provide detailed explanations of difficult expressions, word meanings, and the aim and background of the works. The modern Japanese translations offer smooth and reader-friendly text while preserving the depth of the original. The translations and explanations are provided by the best authorities of Japanese literature research in the present day. The series has acquired a solid reputation as a collection of Japanese classical literature that can be used by a wide range of people, from the general public to researchers.
The three-column layout of the printed version, composed of headnotes, classical text and modern language translation, found a favorable reception. In the JapanKnowledge version, the three columns are displayed on a single page, allowing you to read the classical text simultaneously with headnotes and the translation. In addition to OneLook, you can search within individual contents. You can look for exactly what you need for your purpose by using the full text search function or by specifying the search scope and search condition at will.
All 88 volumes are planned to become available in phases.