The Shueisha Dictionary of World Literature 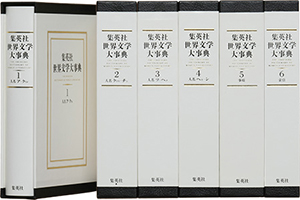 This dictionary, a compilation of the history of world literature, required as many as 15 years from the beginning of planning to completion.
The dictionary covers a vast range of works, from the mythical literature of the ancient Orient in the 27th century B.C. to the latest contemporary literature, including regions such as Northern Europe, Eastern Europe and Latin America, as well as Asian regions such as China, Korea and India, the Middle and Near East, Africa, etc., without bias toward Western Europe, Russia and North America.
The dictionary contains not only descriptions of authors and their works, but also terminology and trends in literature, as well as carefully collected topics concerning the history of literature in various genres. This exhaustive dictionary covers to the maximum extent possible the literature of all regions, eras and ethnic groups from a global point of view in our increasingly globalized 21st century. This is the definitive dictionary of world literature, serving as an accurate and detailed source of information on literature, while serving as a guide to further extend the pleasure of reading.
The contents of the digitized version are periodically updated with additions of new entries following the appearance of new writers who have been highly appraised internationally and revisions of existing entries following the deaths or winning of awards by writers, etc. The total number of entries now exceeds 16,600 (as of 2014). We have included in JapanKnowedge the latest revised edition based on the printed edition of The Shueisha Dictionary of World Literature in six volumes.
Editorial board: An Ushiku, Ito Masafumi, Oka Michio, Kawashima Hideaki, Kawamura Jiro, Kanno Akimasa, Kuwana Kazuhiro, Shinoda Hajime, Shimura Masao, Takamatsu Yuichi, Tsuzumi Tadashi, Hara Takuya