(Records of the Emperor and the Imperial Family) 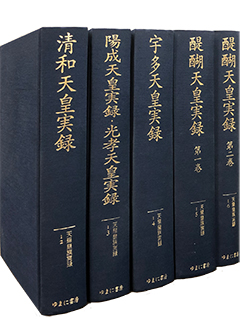 Paramount prewar-period research materials chronicling the historical traces of successive emperors and imperial families. All 135 volumes plus a supplementary volume.

Records of the Emperor and the Imperial Family are a chronological record of the historical traces of successive Japanese emperors from Emperor Jinmu to the 121st Emperor Komei, as well as the five emperors of the Northern Court, Emperor Kogon, Emperor Komyo, Emperor Suko, Emperor Gokogon, and Emperor Goenyu, and also including the empresses and consorts, relatives of the emperors, and imperial princesses (with the exception of the four families of the imperial princes of Fushiminomiya, Katsuranomiya, Arisugawanomiya, and Kanninnomiya), prepared in the pre-war period through extensive research conducted by the Department of the Imperial Household on all extant documents and records available at the time.

Compilation and editing was initiated in the Department of the Imperial Household’s Bureau of Drawings and Books in May 1920 and completed in December 1936. Only very few copies were prepared, being presented only to the Emperor and certain related persons. Many years passed with almost no researchers making use of the materials until, in 2005, the publisher Yumani Shobo gained permission from the Archives and Mausolea Department to publish a facsimile edition (all 135 volumes plus supplementary volume 1). Since that time, numerous researchers have come to make use of the materials, and we are now pleased to make a digitalized edition available for the convenience of still larger numbers of people.

As the historical traces of the full lives of successive emperors, along with their empresses and consorts, and relatives of the emperors up to the Edo period have been compiled in Records of the Emperor and the Imperial Family, searching for persons such as the grandchildren, great-grandchildren and consorts of emperors, who have not generally been the subjects of research thus far, is now made easy through the use of the search function. The digital edition will also make it possible to search in far greater detail not only for historical incidents that have taken place on the Imperial Family stage but also to enhance research into the history of the Imperial Family and court society, as well as ceremonies and rituals that have been performed in the Imperial Palace in each age.