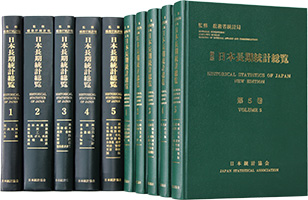 Historical Statistics of Japan is a collection of overall and systematic long-term chronological data from the early Meiji period(the 1870s), gathering together and organizing the major items from a wide range of fields including Japan’s national territory, population, economics, society, and culture.

The statistical data contained in Historical Statistics of Japan have been selected and edited from basic statistics found in statistical surveys, official statistics and derived statistics implemented or prepared by Japan’s public and private survey organizations.

The JapanKnowledge edition enables full searches in the titles of each statistical table, the commentary at the beginning of each chapter, and letter strings (except numbers) in the statistical tables and footnotes. Moreover, as the whole volume is compiled in both English and Japanese, it is possible to perform searches for keywords in both languages. All statistical tables are also downloadable as Excel files. We certainly hope you will take advantage of these extensive statistical data, accumulated from the Meiji to Heisei periods, which, together with the companion volume "Japan Statistical Yearbook," will provide you with valuable material for your statistical analyses.