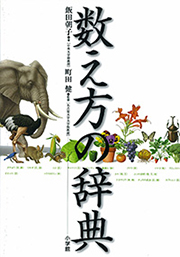 Also, the dictionary makes it easy to see whether traditional Japanese, Chinese, or English numerals can come before a counting word.

Many special columns give answers to questions such as "why is the counter hai used for squid and crabs?" By examining Japan's "counting culture," you can enjoy the richness, depth, and fascination of Japanese linguistic expression.