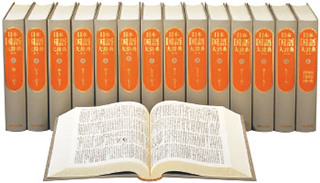 The complete, digital version of the Unabridged Dictionary of the Japanese Language, 2nd edition in 13 volumes. The largest Japanese dictionary in Japan, containing a total 500,000 entries and 1 million example sentences.

Not limited to the fields of Japanese language and literature, the dictionary was completed over a period of more than 40 years, by over 3,000 experts in fields such as history, Buddhism, Chinese classics and folklore, social sciences, including economics and law, in addition to natural science researchers including zoologists and botanists.

Newly enabled is a diverse range of approaches to terms, including an Etymology column based on the latest research findings, showing a term’s origin, history, and changes in meaning and usage; Dialect entries indicating usage by region; and an Etymological Theory column, allowing various theories to be viewed at a glance.

For the JapanKnowledge edition of the “Nikkoku” (Nihon Kokugo Daijiten), we have prepared a great variety of search functions to make its data even more accessible. Not only are headings and main texts included in the advanced search, but search range can be focused to example sentences, historical kana orthography, dialects, etymology, etymological theory. You can also narrow down to the exact information you wish to see such as entry type, part of speech, or genre.