A 17-syllable verse form consisting of three metrical units of 5, 7, and 5 syllables, respectively. One of the most important forms of traditional Japanese poetry, haiku remains popular in modern Japan, and in recent years its popularity has spread to other countries.

Loose usage by students, translators, and even poets themselves has led to much confusion about the distinction between the three related terms haiku, hokku, and haikai. The term hokku literally means “starting verse.” A hokku was the first or “starting” link of a much longer chain of verses known as a haikai no renga, or simply haikai, in which alternating sets of 5-7-5 syllables and 7-7 syllables were joined. Hokku gradually took on an independent character. Largely through the efforts of (1867−1902), this independence was formally established in the 1890s through the creation of the term “haiku.” Haiku was a new type of verse, in form quite similar to the traditional hokku but different in that it was to be written, read, and understood as an independent poem, complete in itself, rather than as part of a longer chain.

, or linked verse, which began to be written in the Heian period (794−1185), was originally considered a diversion by which poets could relax from the serious business of composing poetry. By the time of the renga master (1421−1502), however, it had become a serious art with complex rules and high aesthetic standards. Haikai no renga, or simply haikai, was conceived as a lighthearted amusement in which poets could indulge after the solemn refinements of serious renga.

When haikai began to emerge as a serious poetic genre in the early 16th century, two characteristics distinguished it from serious renga: its humorous intent and its free use of haigon (colloquialisms, compounds borrowed from Chinese, and other expressions that had previously been banned from the poetic vocabulary). However, the erudite (1571−1653) succeeded in establishing a more conservative and formalistic approach to haikai. For Teitoku, humor implied a sort of intellectual wit, and the distinction between haikai and renga lay ultimately only in the use or nonuse of haigon. He established strict rules concerning the composition of haikai and sought to endow the form with the elegance and aesthetic elevation of waka and serious renga.

After Teitoku's death his formalistic approach was challenged by the more freewheeling of haikai led by (1605−82). Sōin emphasized the comic aspects of haikai. Characteristic of the Danrin style of poetry was the practice of yakazu haikai, in which a single poet would reel off verse after verse as quickly as possible in a sort of exercise in free association. The most renowned example of this is the legendary performance by Ihara (1642−93) in 1684 at the Sumiyoshi Shrine in Ōsaka, where he composed 23,500 verses in a single day and night.

Bashō was not only the greatest of haikai poets, he was also primarily responsible for establishing haikai as a true art form. Having received instruction in both the Teitoku and Danrin styles of haikai, he gradually developed in the late 17th century a new style that, through its artistic sincerity, transcended the conflict between serious renga and comic haikai and could express humor, humanity, and profound religious insight all within the space of a single hokku.

(1661−1738) wrote haikai of exceptional quality, and his notion of makoto or “sincerity” represents one of the high points of Japanese poetic theory. Other notable poets of the time include , , and . Bashō also had a great number of disciples. Of these, the so-called Ten Philosophers are particularly well known. They are , , , , , , , , Shida Yaba (1663−1740), and Tachibana Hokushi (d 1718). , another of Bashō's disciples, is also worthy of mention.

After Bashō's death many of his disciples set up their own schools of haikai. In general these poets sought special effects−with some writing enigmatic, puzzlelike verse and others satisfying themselves with witty wordplay−and at times their haikai became virtually indistinguishable from and , popular comic verse forms that had come into vogue in the Genroku period (1688−1704). In the late 18th century, however, there arose a movement of poets who sought to restore high aesthetic standards. The principal figure in this haikai reform was the talented painter-poet Buson, and the main cry of the movement was “Return to Bashō!” Buson possessed great imagination and culture and a painter's eye for vivid pictorial scenes. Other important haikai poets of the period include , , and .

The number of composers of haikai grew rapidly in the early 19th century. This popularization, however, was accompanied by a general decline in quality. The most notable exceptions were Iwama Otsuni (1756−1823) and Kobayashi Issa. Issa's poems about his poverty and about his love for small animals and insects are particularly memorable, and today he ranks with Bashō and Buson as one of the most beloved haikai poets.

The history of modern haiku dates from Masaoka Shiki's reform, begun in 1892, which established haiku as a new independent poetic form. It is a history that features constant experimentation and the confluence of various literary trends such as naturalism, romanticism, symbolism, and proletarianism. Basic to the modernization of haiku was Shiki's most important concept, shasei, or sketching from life−a term borrowed from the critical vocabulary of Western painting. The magazine that Shiki began in 1897, , became the haiku world's most important publication.

Shiki's reform did not change two traditional elements of haiku: the division of 17 syllables into three groups of 5, 7, and 5 syllables and the inclusion of a seasonal theme. , who succeeded his mentor Shiki as haiku editor of the newspaper Nihon, carried Shiki's reform further with a proposal that haiku would be truer to reality if there were no center of interest in it. The logical extension of this idea was free-verse haiku, since the traditional patterning was seen as another artificial manipulation of reality. Hekigotō also urged the importance of the poet's first impression, just as it was (sono mama), of subjects taken from daily life and of local color to create freshness. Other poets associated with Hekigotō's shinkeikō haiku (New Trend Haiku) movement were Anzai Ōkaishi (1886−1953), , and .

Protesting against the prosaic flatness characteristic of much of the works of Hekigotō's school, Seisensui maintained in 1912 that free-verse haiku must also discard the seasonal theme. He held that haiku must capture in its rhythms not the object perceived but the poet's perception. The work of many able poets appeared in his magazine Sōun. Notably successful among them were and , who both led wandering lives of poverty, like the beggar-priests of the past.

In 1912 began in the pages of Hototogisu (which he had edited since 1898) his lifelong defense of the traditional 17-syllable form, the seasonal theme, and the descriptive realism of Shiki. He outlined his views in a collection of essays published under the title Susumubeki haiku no michi (1915−17, The Path Haiku Ought to Take). The first flowering of the traditional school was in the Taishō period (1912−26) and featured such gifted poets as , , , and Watanabe Suiha (1882−1946).

By 1920 a second generation of poets clustered about Hototogisu, including , , , and . The first Shōwa-period (1926−89) poet to break away into subjects previously avoided was , who wrote verses on romantic and sensuous love. Hototogisu continues to represent the central position in haiku to the present day.

Mizuhara Shūōshi broke away from Hototogisu in 1931, two years after having assumed the editorship of the magazine Ashibi. Shūōshi's talent for making imaginative use of the historical past shines in his collection Katsushika (1930). Ashibi was an important outlet for such poets as Yamaguchi Seishi, , and Hashimoto Takako (1899−1963), the foremost woman haiku poet.

In the early Shōwa period the term shinkō haiku (new haiku) loosely identified all groups that deviated from the traditional Hototogisu school. In addition to the Ashibi poets and the modernistic school of Hino Sōjō's magazine Kikan, the term also included the proletarian school, headed by Kuribayashi Issekiro (1894−1961), originally of Seisensui's group. Other prominent proletarian poets were Hashimoto Mudō (1903−74), Shimada Seihō (1882−1944), and Yoshioka Zenjidō (1889−1961). Another politicizing group centered around the liberal publication Kyōdai haiku, which appeared during the period 1933−40 and accepted both conventional and free-verse haiku.

During the military-dominated prewar and World War II period, haiku was controlled by government censorship. The immediate postwar period saw an effort by the leftist union Shin Haikujin Remmei to “break the hold of feudalism in haiku and to expose war collaborators,” a pronouncement aimed at Hototogisu and other traditional schools. In 1947 many leading poets withdrew from this union. The Modern Haiku Association (Gendai Haiku Kyōkai) was formed in July 1947 to “enhance modern haiku” with the inclusion of all groups from the political left to the literary traditionalists.

The effort to unite all factions was stimulated by a widely discussed 1946 article entitled “Daini geijutsuron” (On a Second-Class Art), in which the critic maintained that modern haiku was not a serious literary genre but only a pleasant pastime. A number of efforts to “modernize haiku”−to make it relevant to contemporary experience−were stimulated by the publicity given Kuwabara's article. One such effort was Tenrō (1948−94), a magazine begun under Yamaguchi Seishi's editorship and supported by the prewar liberal Kyōto University haiku association together with some former Ashibi poets.

Ashibi, which continues to appear, is the most important vehicle of the nontraditional haiku. Other prewar magazines that continue to appear are Ishida Hakyō's Tsuru and Katō Shūson's Kanrai. Iida Dakotsu's Ummo ceased publication in 1992. The extreme haiku fringe of symbolism and surrealism is found in such magazines as Taiyōkei, founded in 1946 by Mizutani Saiko (1903−67) and Tomizawa Kakio (1902−62), and Bara, started in 1952 by Tomizawa Kakio and Takayanagi Shigenobu (1923−83).

The West's first introduction to haiku came in B. H. Chamberlain's pioneer work, Japanese Poetry (1910), in a chapter entitled “Bashō and the Japanese Epigram.” William Porter's early anthology of translations was entitled A Year of Japanese Epigrams (1911). Haiku was first introduced to France by Paul-Louis Couchoud at the time of the Russo-Japanese War. The title of his introduction to haiku was Les Epigrammes Lyriques du Japon. The use of the term “epigram” in these titles is indicative of how haiku was first interpreted abroad.

Ezra Pound quickly noticed and appropriated the haiku technique of cutting up the poem into two independent yet associated images. In France Paul Eluard wrote poems in the haiku style. Haiku has rapidly become naturalized both in Europe and in the United States, and magazines of original haiku are published. Haiku magazines in the United States include Modern Haiku, byways, and Tweed. 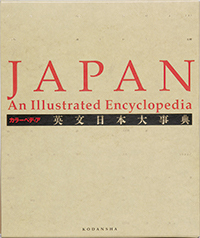 haiku 【俳句】
A 17-syllable verse form consisting of three metrical units of 5, 7, and 5 syllables, respectively. One of the most important forms of traditional Japanese poetry, haiku remains popular in modern Japan, and in recent years its popularity has spread to other countries.